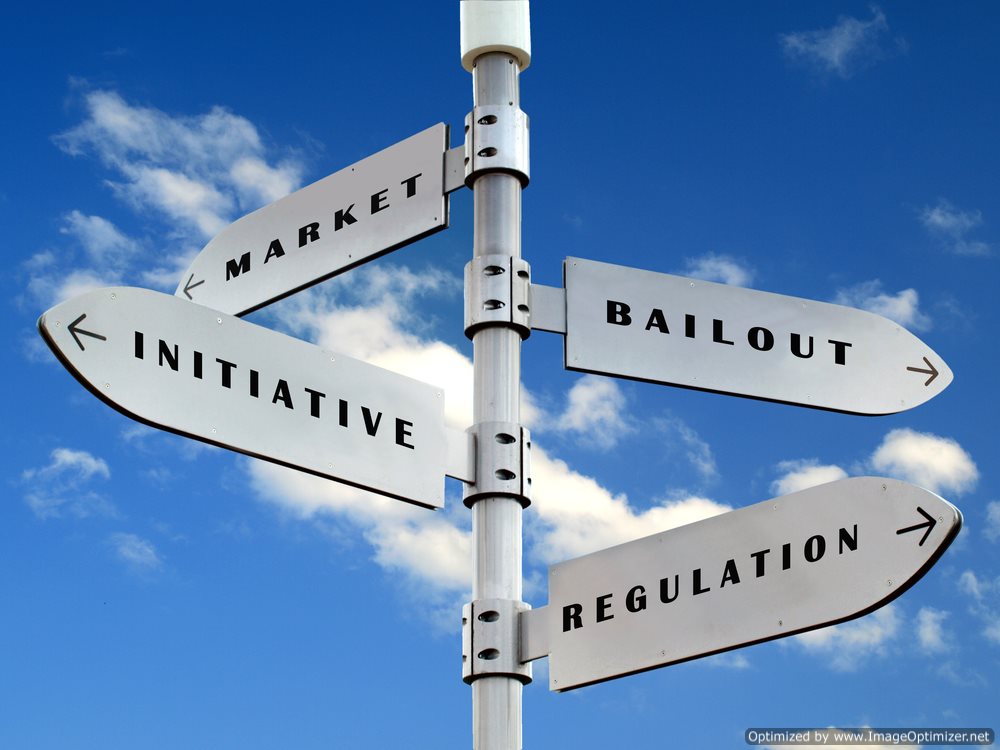 What is a Bailout?
• In the field of economics, a bailout refers to the act of loaning or injecting capital into an entity, such as a company, an individual or a country, which is in danger of failing. The bailout is a calculated financial maneuver that increases a failing entity’s liquidity profile; the maneuver is undertaken in an attempt to free the struggling entity from insolvency, bankruptcy, total liquidation or ruin.
• In addition to injecting a dying organization or market with cash, a bailout can also be administered for sheer profit; an example of such a maneuver occurs when a predatory investor resurrects a faltering company by buying its assets or shares at an enormous discount (this occurred when JP Morgan purchased Bear Sterns in 2008).
• Other reasons for a bailout include: for social improvement or to prevent greater socioeconomic failures. An example of the latter situation can be elucidated by examining the relationship between the United States Federal Government and private transportation companies such as airliners: it is the policy of the US government to protect the biggest transportation companies (petrol companies, airliners etc.) from total failure through the issuance of severely discounted loans and subsidies.
• Companies, such as airliners or enormous investment banks, are deemed “too big to fail”, because their services and assets under management are considered, by the United States Federal Government, to be constant universal necessities in maintaining the health, welfare and security of the nation.
Principal Themes of a Bailout:
• Throughout the 20th and 21st centuries, certain principles have emerged that are seemingly consistent with bailouts:
o To initiate a bailout a central bank will typically provide a loan in order to help the system cope with liquidity issues.
o In a number of bailouts, the underlying government has let insolvent institutions (those with insufficient funds to pay-off short-term finances and massive debts) fail in a systematic way. An example of such a maneuver can be found with Lehman Brothers during the financial crisis in 2008.
o A bailout requires that all struggling organizations make their financial situation 100% transparent. Understanding the true financial position of struggling enterprises or nation’s ensures that the extent of losses and quality of assets are known by the underlying government.
o Those banks deemed healthy enough to survive, in a collapsing market, require a recapitalization, which requires the underlying government to inject funds to the institution, in exchange for preferred stock (receives a cash dividend over time). This cash infusion enables the bank to lend money to other banks or investors.
o The government should take ownership, either through equity or stock, in a struggling company to the extent taxpayer assistance is provided. The government should become the owner so it can later obtain funds by issuing new shares of common stock to the public.
o In most bailout situations, the interest rate will be slashed to stimulate the economy by enticing individuals to borrow.
Arguments against a Bailout:
• A bailout signals lower business standards for enormous corporations by incentivizing risky activities; big corporations have a safety net regardless of what they do
• A bailout promotes centralized bureaucracy by enabling government bodies to choose the specific terms of a bailout
• The action instills a corporatist style of government where a failing business can use the government’s power to extract money from taxpaying citizens
• When capital is injected into a dying corporation, the money supply will invariably rise, sparking inflation.